My mom’s sister has spent her life with the forest service studying and monitoring range use and invasive species throughout the West, from Oregon to New Mexico. Years ago I went out with her into the mountains of Eastern Oregon to monitor watering holes used by sheep and cattle on public lands. Picture this for a workday: Load up your horses and dogs (and your niece if she’s inclined) and head into the woods for the day to ride up and down trails looking for signs of overgrazing, stressed watersheds, and free-range animals in places where they shouldn’t be. We’d stop at a pond, she’d take measurements, then we’d move on. Working our way up steep inclines, stopping to breathe the horses every few steps, this leisurely pace allowed for careful observation of the stunning biodiversity around us. Nice work, if you can get it, no?

My aunt can also be a bubble-burster when it comes to appreciating plant life. A stroll through wild areas with her is an education in noxious weed identification, which one would think is a useful thing until the thing that is noxious also happens to be simply lovely to look at.

Take the Common Reed, for example. It grows in – is almost synonymous with – wetlands, its dramatic height, plumage, and density not only beautiful but also relished by any number of bird species. Who would even think it poses an existential threat to the marshes it inhabits? When my aunt came to visit New York one fall and we naturally took her to our beloved Preserve, she took one look at the abundance of the reed and proceeded to burst my bubble about its beauty and its function as a bird habitat. Something to the effect of, if that’s not eradicated there will be no more marsh. POP! Amazing how one can come to view every prolific being with suspicion.

Purple loosestrife is another stunningly noxious beauty. I’d not noticed it before moving to Upstate New York, where its vivid purple explodes every August wherever there is water. I can’t stop looking at it and requesting for Kevin to photograph it – I love how the color changes with the light from lavender to fuschia, how it grows in wide swaths within the dark greens and rich browns of cattails, how it is a haven for bumble bees and butterflies. With my aunt’s voice in my ear, I finally got brave enough to research the stuff and discovered the species is a notorious target of the Aquatic Nuisance Species Task Force. Phooey. With one plant producing up to 2.5 million seeds, purple loosestrife quickly will choke out native species where ever it takes root. 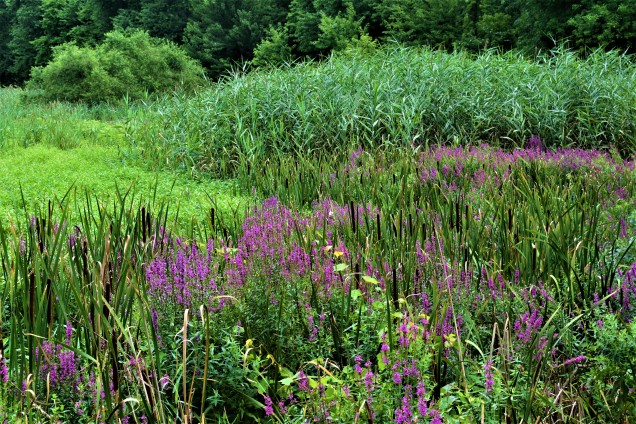 Anyone who understands the delicate balance of biodiversity knows why this is a problem. I think of the non-native beach grass planted on the Oregon Dunes where I spent so much of my childhood, or the cane toad fiasco in Australia (watch this alarming and hilarious short documentary about the toads – you won’t regret it!), or the Shakespeare fanatic who brought starlings to North America. All of these well-intended (perhaps) acts have had disastrous consequences for native species, deeply impacting the intricate web woven by the wisdom of Mother Nature. Dylan says, “Behind every beautiful thing there’s been some kind of pain.” I have often found much truth in this observation. As I look out over the sea of purple in these photos, I find myself sadly in agreement once again.